Honoring artists who have given a lifetime to the community

Each year our committee selects a local artist or arts educator who has given extensively to our regional arts community throughout their lifetime.

This person is then the featured artist of the year and their artwork graces the keepsake magnet.  We also display an exhibit of their work at The Kemp.

Making a donation provides you an opportunity to support the visual arts in North Texas while honoring or memorializing individuals who brought art into your life or have kept you "art inspired".

How Does It Work?

Gary Kingcade, born and raised in Wichita Falls, gradauted from MSU and taught art in the WFISD for 40 years.  As a hugely popular art educator, he impacted the lives of hundreds of local students.  In addition to teaching art, Mr Kingcade has been a working artist throughout his lifetime, primarily in painting, but also sculpture and jewelry making.  His painting focuses on the spiritual landscape of regional Texas and beyond. 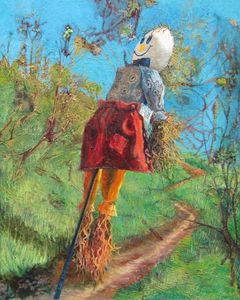 Past Lift Up Art Featured Artists

Tom Crossnoe (1925 - 2007) was a Professor of Art at Midwestern State University for many years, serving as Chair of the Art Department from 1966 to 1986. He was instrumental in encouraging the support of the Fain Fine Arts Center at MSU, including the modernized metalsmithing, printmaking, and ceramics facilities and the Juanita Harvey Gallery. His leadership also nurtured the world-class MSU Visiting Artist program that still runs today. His is influence on the arts in Wichita Falls was widely felt, from students to professional artist.

Her meticulous attention to detail not only graced the events she participated in but was evident throughout her extensive body of artwork. She’s known primarily for her painting in oil, acrylic and watercolor and for her interest in stained glass and pottery. Ms. Higgins was a methodical technician, applying her process to understanding her media, spending significant time learning to control the material and creating works of crisp detail and beautiful clarity.

Ms. Higgins was a pivotal member of the Arts Council Mystery Art committee and her generous support was vital to the success of that event over the years. The Arts Council is very proud to feature her artwork in Lift Up Art in 2019.

Richard Ash’s (1943 - 2019) influence on the arts community is deeply-felt and continues to resonate.  He was a Professor of art in the Harvey School of Visual Arts at Midwestern State University in Wichita Falls, TX from 1968 – 2007.  In addition to teaching printmaking and drawing, he chaired the art program for fourteen years and directed the university gallery and its Visiting Artist Program from 1978 – 2002.

Mr. Ash’s primary focus was always on printmaking, bringing this specialized field of study to countless Wichita Falls students over the years. He was a graduate of Wichita State University, Wichita, KS where he earned his B.F.A. and M.F.A. degrees.  He was awarded the Hardin Foundation Distinguished Professorship in 1979.

“My first memorable art experience as a freshman in art school revolved around seeing an etching being printed. The plate and paper appeared as one thing on the left side of the press, and something else on the right...magic! Nothing else mattered. After that moment, I was hooked.” - Richard Ash

Jack Stevens (1934 - 2019) dedicated most of his life to the arts, as evidenced by the many sculptures throughout the community, and has generously shared his talents with the Arts Council.

Jack was born in a small ranching community in West Texas. Orphaned at a young age, in order to survive he went to work on cattle ranches in West Texas and New Mexico. It was here that he witnessed the artistry of the toiling cowboy, the physique of the horses working the herd, and the raw strength of the cattle. His first art was rendered on the blade of a shovel with a piece of charcoal from a wood fire. Becoming a full time artist in 1970, Jack has worked on paintings, drawings, and sculptures at his ranch home. His works can be seen on public display throughout the North Texas area and are in private collections world-wide, but all reflect his early images and real life experiences of America’s western culture.

Dean Kraken, former managing director of Cowboy Hall of Fame, has said “Jack Stevens has a fine and real feeling for the subject he sculptures and the West. He has the working cowboy’s outlook on life as well as artistically. Jack is just right for depicting the West as it was…and is. He has lived it…he still lives it…and his work will live on as an artistic memory of a great heritage.”

Mary Palmer (1918 - 2018) had an exciting and unusual history; her watercolors reflect her early years in the Australian Outback where her family grazed sheep on a 9 by 7 mile strip of land. Born in Melbourne, Australia, she spent her early years on her family’s sheep farm, Warriup, some 2000 miles west on the remote southwestern coast. During her early years, she entertained herself by picking flowers for the many researchers who came to pick specimens that grew there. It was the colors and forms of these flowers that piqued her interest in art. She began to paint the florals, still life, and landscapes that she experienced when she was seven.

Mary’s roots go deep in Australia; her great-grandfather was the first person to own private land in Western Australia and her grandfather, A.Y. Hassell, helped draft the constitution for the Commonwealth of Australia in 1901 and served as a member of parliament for 40 years. He was not the only family member to serve the homeland. After witnessing the emergence of a Japanese submarine off the coast In the early days of World War II, Mary joined the Royal Australian Air Force – one of the first 30 women to do so. Prior to her RAF days, Mary studied painting at the University of Western Australia and taught all grade levels at an all-girls school. She studied art at the Australian School of Sketching and the Perth Institute of Art. During the war, she served as a drill instructor, training 40 women every three weeks. During this time, Mary met an American naval serviceman who was serving in the Philippines and Dutch East Indies; his fleet sought refuge in Australia after fleeing from the Japanese. They married and following his military career, they settled in Wichita Falls.

Over the years, Mary taught art lessons to students from 7 to 94 years. She encouraged us all to “have a go at it,” cointung to paint and teach to the age 99.

Glen Issac Conway (1929 – 2015) was born in Denton County, TX, but completed his public education in Oklahoma. He then returned to Texas to attend the University of North Texas, receiving his BA degree in 1951. After serving in the Army for two years, he moved to Wichita Falls where he taught art at Harrell Elementary, Barwise and Hirschi Junior High Schools. Shortly after he began his teaching career, he again enrolled in UNT and received his Masters of Education degree. He also studied art at the University of Colorado the summer of 1961. During the 1960s, Glen taught Saturday morning art classes to children age ten and under through a program at Midwestern State University. Before retiring from Wichita Falls ISD in 1988, he also taught mechanical drawing and distributive education.

Glen was active in the Wichita Falls Art Association for many years and won First Place Overall for an abstract water color at an art show sponsored by the Art Association. Over the years, he donated 30 gallons of blood to the Red Cross. He and Retta Bradford married in 1956, and had three children, nine grandchildren and one great-grandchild. Mr. Conway was a teacher for over 35 years and in that time he touched the hearts of many students and gave them the inspiration to be artists.

Polly Cox (1921 – 2005) was born in Wichita Falls and earned an art degree in 1942 at Sophie Newcomb College where she met her husband, Aubrey Cox who became a physician.  After he served in World War II the couple moved to Wichita Falls.  Polly continued to refine her art by attending classes and workshops all over the world.  She was very involved with the Wichita Falls Art Association serving as the president many times and later being named as an honorary lifetime member.  She has acquired numerous awards and acclaim and has been featured in books and magazines, especially for her watercolors.   Polly always strived to learn more about art and mastered many types of mediums including painting, ceramics, watercolors, and even constructing the costumes for the Wichita Falls Ballet Theatre too.  Her artwork has been extensively exhibited in Dallas, Santa Fe, and many venues in Wichita Falls.  Polly Cox felt very strongly that she wanted to reflect her travels, throughout the world, in her artwork focusing on the beauty and to point out the richness, value, and the natural wonder of the things that affirm our lives.

Steve Grey’s (1952-2003) desire for his final exhibit at the Kemp Center, weeks before he died, was to just focus on positive things, but anyone who knows his art recognizes that his focus was always positive.  Early on, Steve determined that he would make his living from art which led him to be a courtroom illustrator, a portrait artist, and an art teacher.  It was Wichita Falls’ good fortune when McClurkan’s hired Grey in 1977 as a fashion illustrator.  He quickly became a positive force in the city’s art scene teaching classes, holding workshops and producing works that hang in numerous homes here and across the nation.  But it was Grey’s exuberant use of color, his larger-than-life flowers, and children playing on the beach that best summed up his life.  On loan for many years at the Kemp is Grey’s bold, cheerful work entitled “L’Effet que tu me fais” - roughly translated “the effect you have on me” which describes the profound effect that he has had on art in Wichita Falls.

Scottie Parsons (1925-2011) began her life in Watonga, Oklahoma, in 1925 and later pursued a career as an art teacher in the Wichita Falls elementary school system. Parsons married Frank D. Stewart with whom she had three children. After Stewart’s death, Parsons later on married Dr. Clyde Parsons. Her artwork became well-known and acclaimed for its brilliant colors and textures. Scottie was a featured artist at the William Campbell Contemporary Art Gallery in Fort Worth, and at the LewAllen Contemporary Gallery in Santa Fe. She became known worldwide when her paintings were displayed at the embassies at the Vatican and in Lima, Peru. The Kemp Center for the Arts is very proud to have on permanent display “Cantos of Pioneers I & II” by Scottie Parsons, an acquisition made possible by Mary Wood.